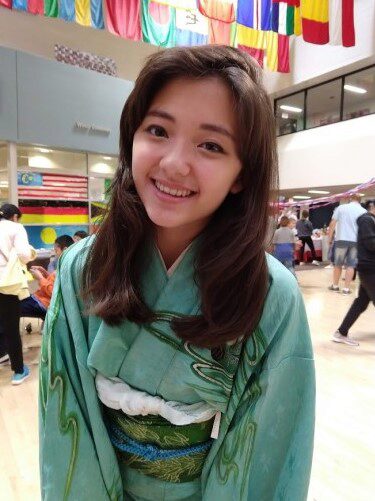 Meet Kayla Watanabe, a second-year NRE student here at Tech minoring in Japanese. In this Q&A Kayla talks about why she chose her fields of study, what hobbies and clubs she’s been a part of, and how she balances work, life, and being a student.

Where are you from?

I’m from the Chicago suburbs up in Illinois, so compared to back home it’s pretty hot here.

What made you choose to go to Georgia Tech?

Georgia Tech is very highly ranked in my major (nuclear engineering), not to mention all the research opportunities that are provided to students here.

What about NRE initially interested you, and made you ultimately decide on that major?

It seems silly, but when I was in 6th grade, my science teacher assigned everyone different types of energy to study and give a presentation on. I was given nuclear energy, “the destructive one”. The more I learned about nuclear energy, the more I realized that everything is just blown up by the media. Ever since then, I started taking a lot of Chemistry and Physics classes in high school, which ended up being my favorite subjects, and I knew that this was the major for me.

What do you see yourself doing in the future within your career?

As farfetched as it is, my dream is to be on the team of engineers that builds the first fusion reactor. I completely geek out when I explain to other people how much better for the environment fusion energy would be (compared to coal and petroleum). I had a nuclear physicist as a physics tutor in my high school, and he mentioned that the reactor is estimated to be built within the next 100 years. I just hope I get to be there when it really does happen. Not just “there” as in on this Earth—there as in on site watching the reactor work for the first time.

How do you think your background has affected 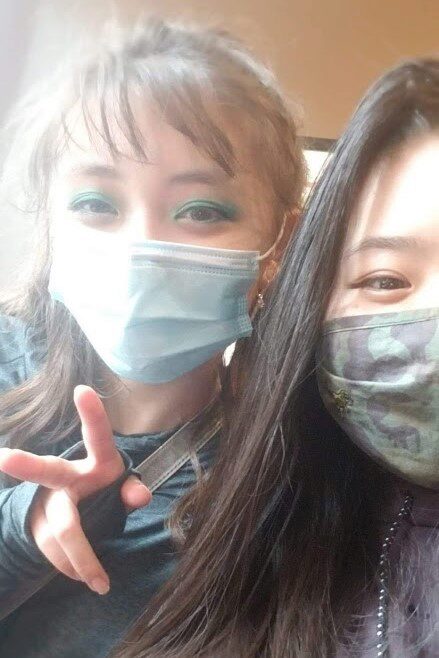 you as a student?

I did not grow up in a very academically strict household, it’s actually the contrary. My parents were always so focused on my brother that most of my childhood was spent figuring things out by myself. From striving for A’s to getting my first job, a lot of what I did was to gain my parents’ attention by producing results. Eventually, when my brother went to college, I got the resolve I wanted from them. From there, I decided to get all these achievements, not for their attention, but for the attention of companies striving towards the future of fusion reactors. To answer your question, my upbringing has allowed me to become an independent student, something I think is important heading towards adulthood.

What was the hardest thing about transitioning to Georgia Tech?

In all honestly, the hardest thing about transitioning was probably losing everyone close to me. My graduating class in high school was 1,100 students, but only two others came here with me to Georgia Tech. Most of my friends go to the University of Illinois, while my parents are back there as well. Due to COVID19, I came to campus second semester, which ended up leaving me surrounded by people who had already found their groups. Luckily, someone from my CS1371 class invited me to play Dungeons and Dragons, and I’ve been friends with everyone in the Explorer Campaign (we play DnD and Magic the Gathering) ever since.

What was something that surprised you about your major?

Considering how famous Georgia Tech is for being good for Nuclear Engineering, I was surprised to find how few people actually have it as a major. In fact, when I tell people I’m majoring in NRE (because I don’t want to be pretentious) most people don’t know what it is. In addition, I was surprised to find out how much of NRE has to do with ethics. It makes sense, since nuclear energy gets such a bad rep from the public eye. 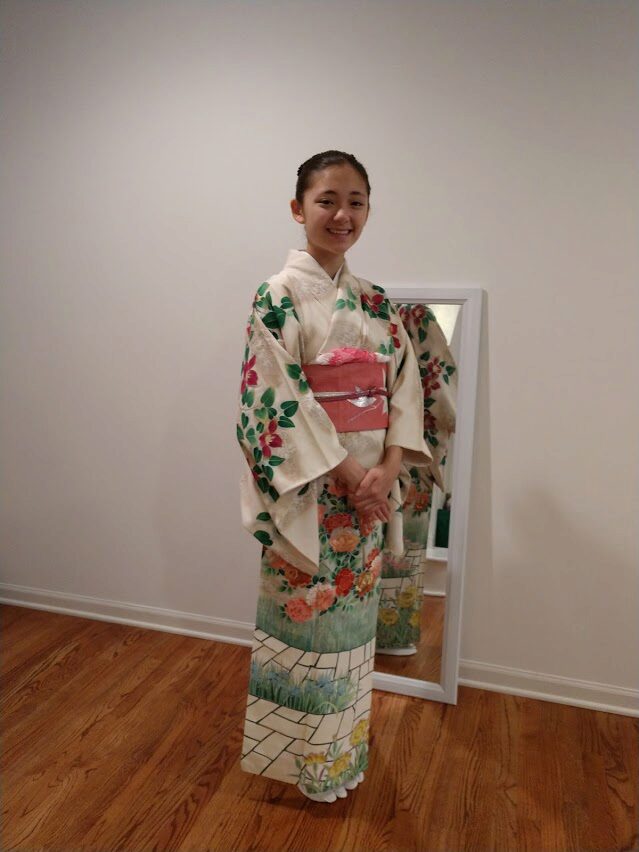 What made you decide to minor in Japanese?

I’m half Japanese half white. Among my cousins, brother, and I, I am the only one that speaks Japanese. For my family’s sake, I felt like it’s my responsibility to carry on the Japanese legacy. In addition, my grandmother passed away when my father was still a teenager, so I have never met her. My father sometimes mentions how much I resemble his mother, which just makes me even more curious about her. Part of me wants to learn more about the Japanese language and culture so I can feel closer to her. To me, Japanese isn’t just a language. It’s a connection I have to my grandparents: my grandmother who I never met and my grandfather who is the only one left. Since I’m the only one that is learning Japanese, my grandfather passed his mother’s kimonos down to me (it’s an incredible honor), which motivated me to go so far as to minor in Japanese. I don’t want a job with Japanese, but it is important enough to me to spend most of college learning it.

In your time here at Tech what’s the thing that you’ve found the most enjoyable?

It’s difficult to say. Everything has different kinds of enjoyable. I enjoy being able to take classes that sincerely interest me, such as NRE 2120. At the same time, I also enjoy being able to play Magic the Gathering with friends on the weekends. I don’t have to worry about the judgmental environment that circulated my high school. I really loved physics in high school, so when I’d jump up all excited to do an experiment other students would whisper behind my back. Here, when I jump up because we’re learning about fusion, the other students agree that it is interesting or even laugh in an understanding, friendly manner. I guess the most enjoyable thing about Tech is how I’m able to be myself, free of judgment.

How has it been for you, finding a balance between having a part time job and school?

I consider my part time job a break from school. At my job, I tutor kids 7-14 in Computer Science. Since I’ve been working there for about a year and a half, many of the kids know me and get excited to see me. There’s something so wonderful about knowing you have a positive impact on others. Kids say the funniest things and are brutally honest, but sometimes that honesty can cause them to say things like “Aww I have to go already?” which just melt my heart. One time a girl even wrote “I love Sensei Kayla” on the white board (when I was in Illinois) and drew a picture of me. Since I enjoy my job, it’s not so much something I have to balance as much as it is a break from school for me, with the bonus of getting paid of course.

What hobbies do you take part in?

Aside from playing Dungeons and Dragons and other games, I like to write music and sing. Usually I write songs when I have intense emotions that I need to let out. Otherwise, I usually sing songs or practice harmonizing with videos online. Also, I love to cook for others! I don’t have very much of an appetite, so I usually end up cooking for other people who pay me for ingredients. While I love making sweets (cheesecake, macarons, etc.) I usually end up making real meals for people (the most recent were chicken marsala and crispy honey chicken with broccoli).

What things do you enjoy about being a part of the Women in Engineering organization?

It’s nice to know some other women in my major right off the bat, even though there aren’t many NRE students in the group.

What sorts of activities do you enjoy doing 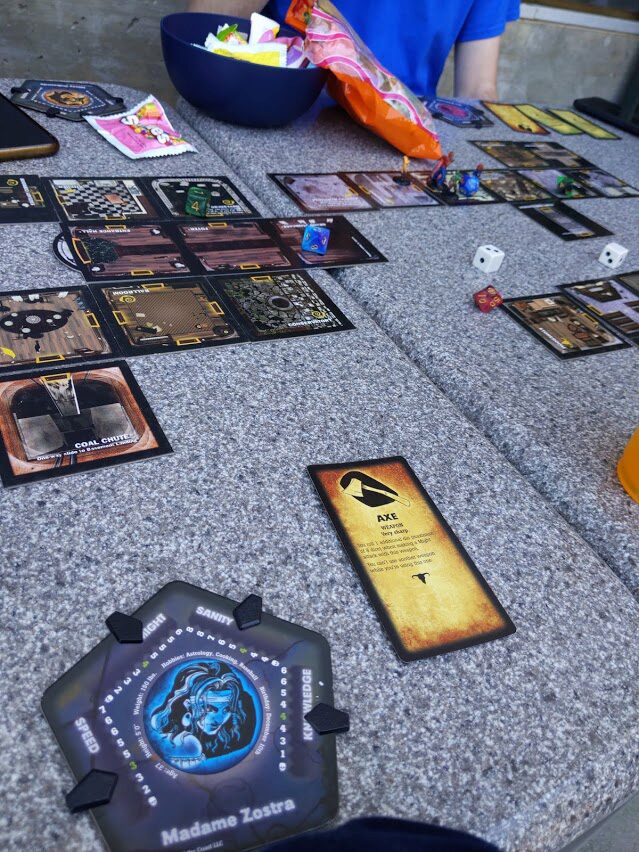 in your free time, or on the weekends?

I like to play Dungeons and Dragons on Saturdays, Betrayal (board game) and Magic the Gathering on Sundays, and I sometimes go out with friends on Fridays. When it’s just me, I like to read manga (Japanese comics) or watch anime (Japanese cartoons). Sometimes I get a random idea, like tie dying a thrifted sweatshirt (I love that sweatshirt by the way), and just do it. Most of the time though, my “just do it” ideas tend to be the occasional going to the gym or buying tons of candy for the next meet up I have with friends.

In all honesty, it was pretty tough at first. I had no friends right off the bat, everyone had already found their cliques, and my friends were over 750 miles away. As a result, I didn’t have anyone to confide in. I didn’t want to suddenly burden the few people I was just starting to build relationships with, so I confided more in my individual stress relievers, like writing music. Art really is one of the best ways to stress relieve, especially for me since my emotions tend to explode if I don’t let them out somehow. I felt like a kid going to Target to buy paper and colored pencils, but it was probably one of the best purchases I made.

In your opinion what is the best thing about NRE?

There are so many things I love about NRE that are probably the reasons others didn’t pick it as a major: Physics, Chemistry, Mathematics, the fact that we know so little about it, etc. In general, I think the best thing about NRE is how it can apply to far more jobs than most people can imagine: medical physics, food sterilization, batteries, the military (to power submarines- it doesn’t have to be for warfare), and, of course, energy! It’s such a niche topic yet it covers concepts from so many other majors. It’s almost like majoring in NRE means I can learn about anything, with the fun part of working with subatomic particles.

What do you think is the most misunderstood thing about NRE?

There are quite a few misunderstandings revolving around NRE. I don’t think I’d be able to count the number of times I’ve told someone my major and they’ve responded with “Oh so a ... government job” as if nuclear warfare is the only option. Even so, I think the most misunderstood thing about NRE would have to be that we’re just doing things for science with no consideration for the environment. At the very least, the reason I want work with nuclear energy is to improve the state of our environment, but it gets such a bad rep from the media. For example, the stereotypical “fumes” coming out of a reactor are seen as toxic and cancerous when in reality those “fumes” are really just water that’s been evaporated by the cooling tower. The industry is struggling due to misunderstandings about the science behind it, but I really think it’s the best path forward to meet clean energy needs.