Midtown High School Students Get a Taste of Biomechanics 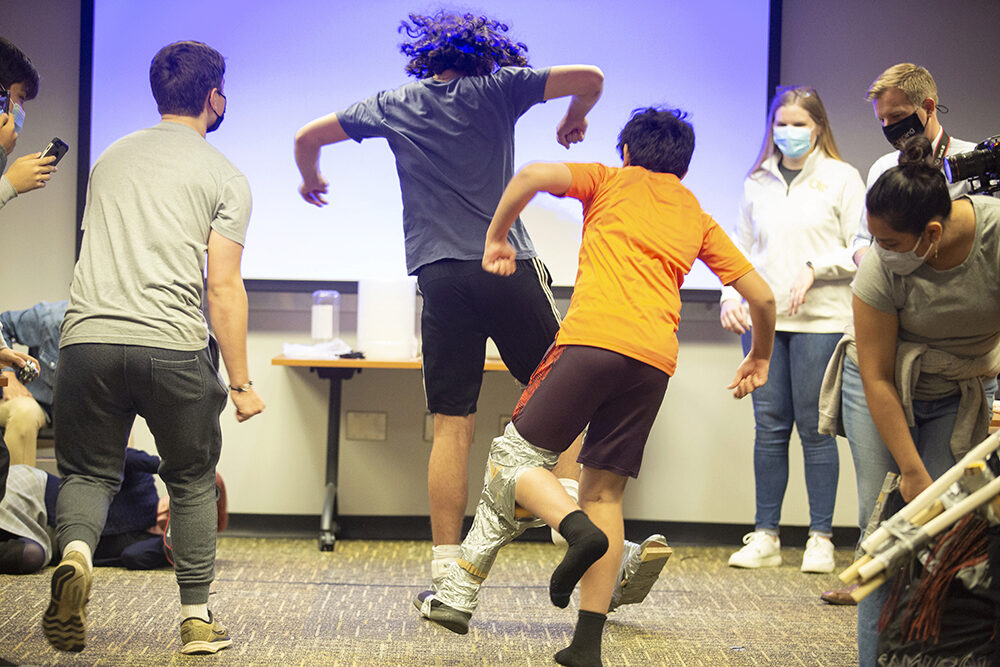 How do you get a group of high school students with minimal exposure to biomechanics to start thinking about a career in research? You put them in a room with Georgia Tech grad students, a pile of simple raw materials like cardboard, wooden dowels, sponges, duct tape and PVC pipes and tell them that they have to build a prosthetic lower limb for a teammate and then get them to race each other.

Woodruff School graduate students Jenny Leestma, Jonathan Gosyne, and former postdoc Max Shepherd did just that when they organized a 2022 National Biomechanics field trip for a group of students from Atlanta’s Midtown High School this semester. The activity was the first portion of a day-long visit to the labs of professors Greg Sawicki and Aaron Young, which focus on biomechanics and human augmentation.

The groups quickly got to work on their designs, with teams trying to figure out if they should prioritize speed, comfort, or durability. After a series of intense heats, the team with the tallest competitor took first, capitalizing on the longer stride length of their competitor.

None of the young men on the team had every designed a prototype of any sort they said. Would they consider pursuing a design related college major now that they’d had a taste of it?

“Absolutely” they all shouted.

The group of students were all participants in Midtown High’s Engineering and Design Pathways, and were excited about the chance to meet young engineers and researchers. Following their race, they had a Q&A with current graduate students from a variety of backgrounds and asked a wide range of questions about funding, college life, career aspirations, how they chose their majors, and what life is like at Georgia Tech.

After the Q&A session the students broke into groups and toured the EPIC and PoWeR labs, getting demos of motion capture equipment, a virtual reality head set, a hip exoskeleton, the cutting edge CAREN simulator, and getting their hands dirty with force sensing insoles, a handheld ultrasound, and EMG.

“We organized this event to demonstrate the exciting world of human biomechanics and assistive robotics, and to inspire interest and curiosity in this realm of science to a diverse group of high school students,” said Max Shepherd, a former lab postdoc who is now an assistant professor at Northeastern University.

Midtown’s teachers were impressed with the facilities, the demonstrations, and the opportunities for their students to engage with a diverse group of engineers.

“I think that my younger students are going to be more inspired to consider, you know, research as an ambition or as a destination that might actually be realistic for them,” said teacher Melissa Nunnink. “But what also happens is they get to see faces that might look more like them that they can then emulate as a career seeker or as an academic one day.”

Many of the older students had already made college decisions before the visit, but senior Alex Swift was excited for his classmates to see what a world-class engineering lab looks like in the hopes that they might be open to new possibilities. Swift will be attending Georgia Tech in the fall as an aerospace engineering major.

“I’ve been to the campus multiple times,” he said. “It’s such an incredible school and you can let your creativity run wild here. Coming to visit a place like this really opens everyone’s eyes.”

Ph.D. student Jenny Leestma, who is co-advised by both Aaron Young and Greg Sawicki, was happy that the graduate students were able to share their enthusiasm for research with potential engineers of the future.

“Working in the field of biomechanics and wearable robotics, I’ve always felt that we’re uniquely positioned to get students excited about STEM because the technologies and challenges that we work on are often things that they’ve had experience with,” she said. “If they’ve seen Iron Man or other Hollywood movies with wearable robotics, played sports, or have a family member with movement challenges, they can see some of their experiences represented in what we do.  I hope that those connections make our research feel more tangible and relatable, and give them the opportunity to better picture areas that they could investigate as future scientists and engineers.”

“We organized this event with two main goals in mind,” added Ph.D. student Jonathan Gosyne, who is part of Greg Sawicki’s PoWeR Lab. “To join forces with other Biomechanists globally on National Biomechanics Day in order to get young scientists excited about the field, and as part of a push to get more involved in the Atlanta community, across demographics and backgrounds. We believe that Georgia Tech's watchwords, Progress and Service, highlight the fact that our mission goes far beyond the lab - it calls us to both serve and learn from our community at large.”

Based on the smiles and looks of amazement on the faces of the students, as well as Midtown High school’s teachers, they accomplished both goals.

“We could not have done it without the support of The Biomechanics Initiative LLC, The Black Biomechanist Outreach Through NBD Award, The Institute for Robotics and Intelligent Machines, The Human Augmentation Core Research Group, Novel Electronics Inc., and, of course, the phenomenal teaching staff and amazing young minds at Midtown High School,” said Gosyne.