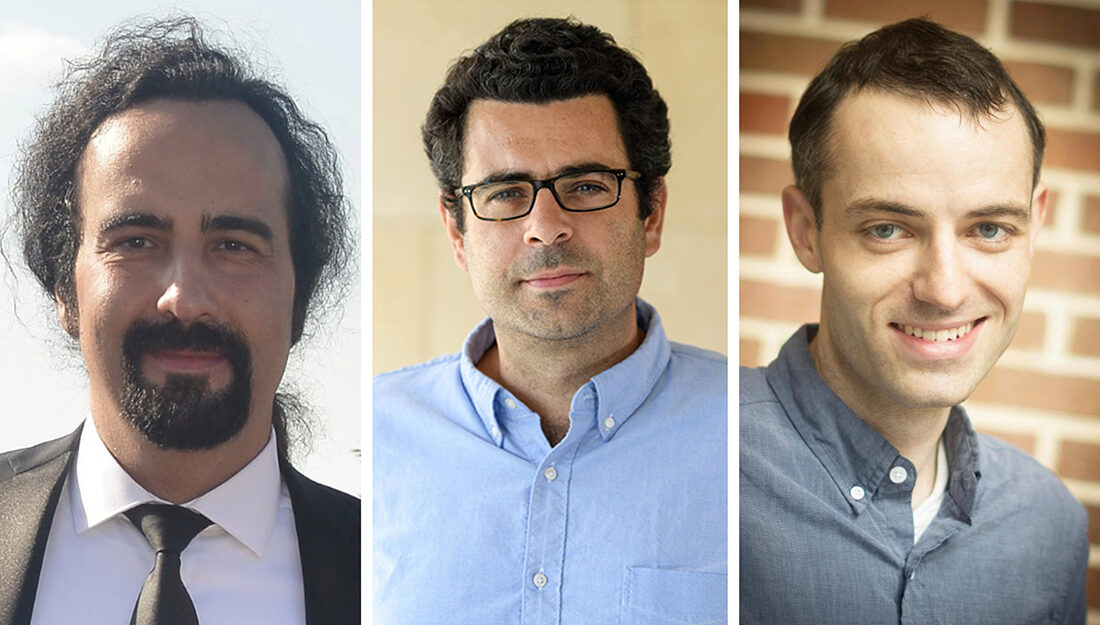 An interdisciplinary team of researchers from the Georgia Institute of Technology has been exploring fundamental research opportunities toward enhanced imaging, diagnosis, and therapy through multiple computational and experimental tracks that will gradually converge and help the scientific community better understand how to treat and diagnose injuries and illnesses involving the skull and brain.

Their 5-year project, which began in 2019 and will run through 2024, has received $2 million in funding from the National Science Foundation (CMMI Award 1933158). The group consists of Professors Alper Erturk and Costas Arvanitis from the George W. Woodruff School of Mechanical Engineering, Professor Brooks Lindsey from the Wallace H. Coulter Department of Biomedical Engineering at Emory University and Georgia Tech, and former Georgia Tech colleague Massimo Ruzzene who is now a professor at University of Colorado Boulder. The principal investigators and their teams have been researching a broad range of frequencies, spanning from low frequency vibrations (audio frequency range) and moderate frequency guided waves (100 kHz to 1 MHz) to high frequencies employed in brain imaging and therapy (in the MHz range).

Erturk’s lab, in collaboration with Ruzzene’s lab at CU Boulder, has been exploring vibrations and guided waves in the human skull. Cranial leaky Lamb waves have recently received attention as a means of transmitting wave energy to the brain periphery, which is a region of the brain that is not efficiently accessed using state-of-the-art techniques. Complex geometry and the porous nature of cranial bones require high-fidelity structural dynamic modeling and analysis, as well as rigorous experiments, for a fundamental understanding toward making this approach a viable medical ultrasound technique. The team models the layered bone structure using micro-CT scans, accounting for high-resolution porous structure, known as the diploë, and performs non-contact vibration experiments for elastic parameter identification, which are then used in guided wave simulations to characterize leaky Lamb wave radiation characteristics in conjunction with experiments. Non-leaky Lamb waves (which propagate within the skull) are also of interest for skull related parameter identification and diagnosis (e.g. of sutures).

“We leverage our background and expertise in structural dynamics and wave propagation in this exciting basic research through high-fidelity modeling, analysis, and rigorous experiments to help overcome the existing challenges and limitations,” Erturk said.

Recent journal articles on this effort can be found in the following links:

Research in the Arvanitis Lab is directed towards the discovery of new methods for focusing ultrasound waves through the skull with the goal to promote and evaluate the therapeutic potential linear and nonlinear effects of high frequency ultrasonic fields in the brain. To this end, Arvanitis and colleagues have derived a general solution (numerical and analytical) for sound propagation in heterogeneous mediums based on the angular spectrum approach and showed that it can effectively correct skull aberrations (see figure on the side). The proposed phase and amplitude correction method, which critically expanded the theory of Fourier Acoustics, provided a computationally efficient and accurate method for trans-skull transmit focusing. 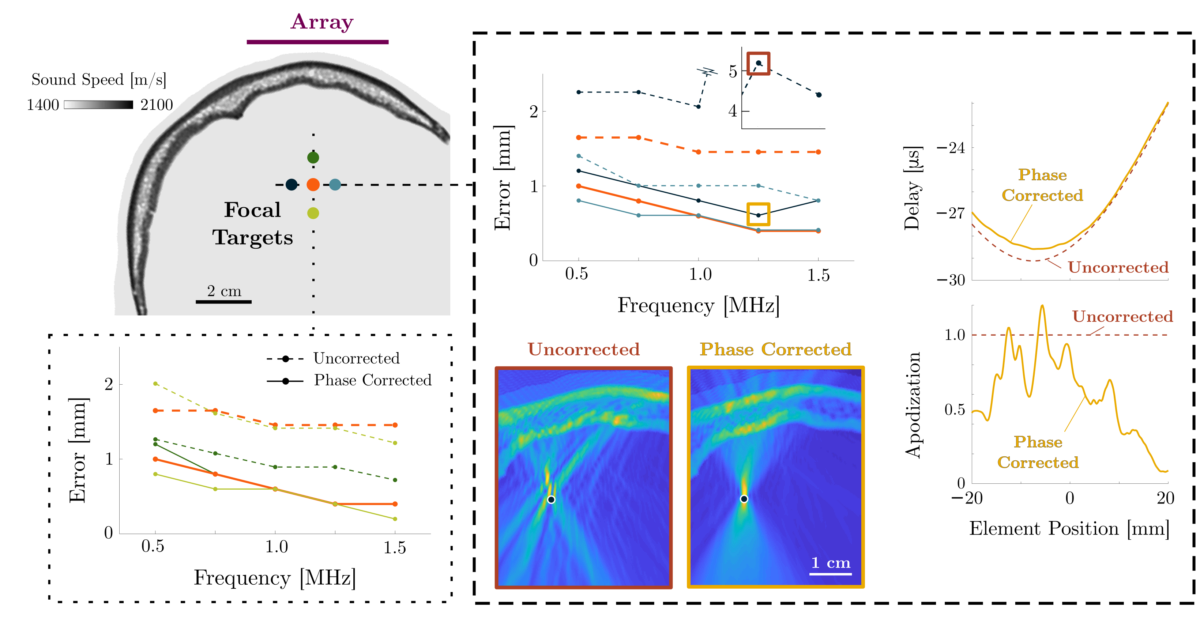 “We envision that the proposed theoretical framework will lead to new methods for adaptive focusing of ultrasonic waves in the brain through the skull and promote highly directive nonlinear effects, thereby opening new possibilities for treatment and diagnosis of brain diseases,” said Arvanitis. “Ultimately, we anticipate that the derived technology and methods will make trans-skull focused ultrasound therapy available to wider population.”

Follow the links for the papers describing this work that also resulted in an international patent application:

“This is the first investigation of the effects of bone microstructure—specifically the degree of porosity in the inner, trabecular bone layer of the skull—on ultrasound imaging through the skull,” Lindsey said. “By understanding transmission of acoustic waves through microstructure in an individual’s skull, non-invasive ultrasound imaging of the brain and delivery of therapy could be possible in a greater number of people.”

These techniques could be used to guide device transducer placement or develop new patient-specific strategies for treatment or imaging. For example, Lindsey’s lab has recently characterized the effect of skull microstructure and angle of incidence on transcranial ultrasound imaging including ultrafast plane wave Doppler imaging, which could be used for imaging blood flow in large cerebral arteries in stroke. This work was presented in September 2020 at the IEEE International Ultrasonics Symposium (DOI: 10.1109/IUS46767.2020.9251477). 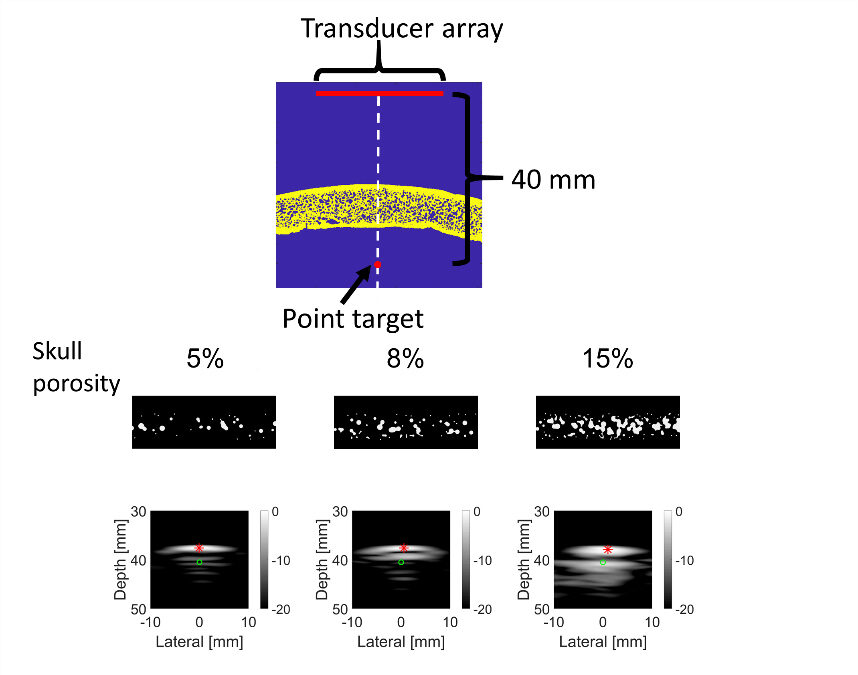 The team's goal in these studies is to stimulate the development of novel medical imaging and therapy techniques that may have profound impact in areas such as diagnosis and treatment of brain tumors, detection of traumas and skull-related defects, mapping of the brain function, and neurostimulation. The research could also have implications on ultrasound-based blood-brain barrier openings for drug delivery, which may be critical for the management and treatment of diseases such as Alzheimer’s.