Jacob Blevins: One of Atlanta Symphony Orchestra’s Newest Vocalists is One of the Woodruff School’s Own 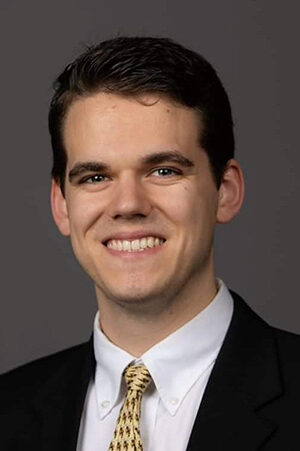 With a desk just outside of the Flowers Invention Studio, Jacob Blevins, a graduate of the George W. Woodruff School of Mechanical Engineering is a constant sight in the MRDC building. As Lab and Facilities Coordinator, Blevins is key to ensuring many of the Woodruff School’s instructional labs and makerspaces are kept in top shape. In addition to this, Blevins is also a mechanical engineering Ph.D. student focusing on robotics. While these duties keep him busy, Blevins has taken a hobby he first picked up while at Georgia Tech and turned it into an impressive passion that has led him to become a member of the Atlanta Symphony Orchestra (ASO) Chorus.

“My musical ability is actually all thanks to Georgia Tech,” Blevins said. “I began with an interest in acapella, joining Georgia Tech's Glee Club my freshman year as an undergraduate in 2017. After a few years of musical growth, I joined Georgia Tech's chamber choir and Georgia Tech's premier all-male acapella group, SympVibes.”

Blevins credits his time with SympVibes and the help of Associate Professor and Director of Choral Activities Jerry Ulrich with helping him refine his craft and take the first steps towards preparing for an intense audition process with the ASO Chorus. For the audition, which involves a massive investment of time and patience, Blevins was assessed on musical theory, sight reading, tonal memory, linguistics, and a solo performance before receiving an offer to join as a bass vocalist.

Becoming a member of the ASO Chorus means Blevins joins a storied and globally recognized musical ensemble that is teeming with world-class artists. He’s able to draw comparisons between his work with the ASO and his time studying and working at Tech, where he relishes in working alongside skilled and motivated individuals.

“The vocalists in the choir, instrumentalists in the orchestra, directors, conductors, and soloists are all some of the best in the world, renowned for their musical talent,” Blevins said. “Being a part of this community satisfies my need— a need that Georgia Tech ingrained in me—to be in a place that pushes me to learn, ask questions, and develop further musically.”

Blevins will sing in upcoming shows just in time for the holiday season, with a series of performances that run from December 15-18, though Blevins won’t be in attendance for the show on December 16. Tickets can be purchased on the ASO website.

Can’t make a show? Listen to some of his acapella work with SympVibes on YouTube or join him in the gym as a member of the Georgia Tech Barbell Club.

The Chorus made its debut at New York’s Carnegie Hall in 1976. In addition to its regular performances with the Atlanta Symphony Orchestra, the Chorus is featured on many of the ASO’s recordings, which have won multiple Grammy Awards.