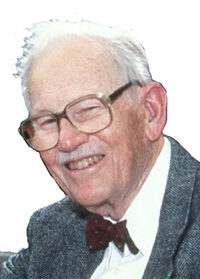 Harold W. Gegenheimer was associated with the printing industry all his life: As a machinist, machine design engineer, inventor, product development manager, and corporate chief executive. He was Chairman Emeritus of the Baldwin Technology Company, an international manufacturer of material handling, press accessory, and prepress equipment for offset printing.

His father, William, started the Baldwin Company in 1918 in a small building next to their house in Baldwin (Long Island), New York. He invented the Baldwin Press Washer and the company emerged as a manufacturer of printing press accessories and controls.

Harold always took an interest in things mechanical, so it was natural that he came to Georgia Tech, where he received his bachelor's degree in mechanical engineering in 1933. Later, he invented the Convertible Offset Perfecting Press, a feature used by most press manufacturers, that allows for one or more colors to be printed on both sides of the paper with just one pass through the press. His inventions, for which many United States and foreign patents have been obtained, were keys to the great growth of the offset printing process after World War II.

Mr. Gegenheimer was President of the National Printing Equipment and Supply Association from 1977 to 1979. He was an officer or director of other industry associations and the recipient of numerous technical and educational awards. In 1983 he was elected Graphic Arts Man of the Year. In 2003, he received the Harold Falk Distinguished Alumnus Award from Chi Psi fraternity for outstanding accomplishments.

Mr. Gegenheimer was a long-time contributor to Georgia Tech's Thousand Club, served as co-chair of his 50th Reunion Committee, and was the recipient of the 1996 Woodruff School Distinguished Alumnus Award.

An endowment given to the Woodruff School in 1995 by Mr. Gegenheimer established the Harold W. Gegenheimer Lecture Series on Innovation.  His endowment supports student programs that encourage creativity, innovation, and design. Through the lecture series and support of capstone design projects, students are exposed to processes that stimulate creativity and lead to inventions and patents. As an inventor, Mr. Gegenheimer expressed an interest in the great advances made at his alma mater through innovative programs that link industry with graduate and undergraduate studies. His endowment supports the School's display, Patents of the Woodruff School Faculty, which features Mr. Gegenheimer's twenty patents and more than 200 U. S. patents of current Woodruff School faculty.

Mr. Gegenheimer died in his home in Mystic, Connecticut on October 4, 2006.