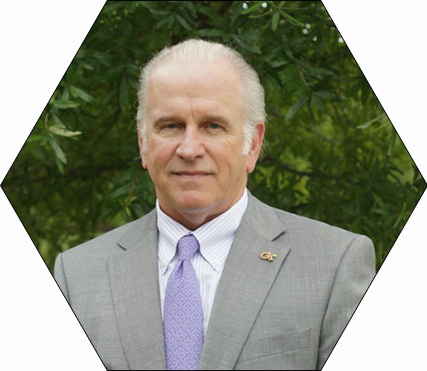 Dr. Neitzel's research is in the area of fluid mechanics. His doctoral work was of a theoretical and numerical nature, studying the hydrodynamic instability of a problem known as spin-down. In the mid-1980s, he began to conduct research on flows related to materials-processing applications such as crystal growth from bulk melts. Such flows are strongly influenced by the phenomenon known as thermocapillarity, which is the variation of a liquid's surface tension with temperature. The instability of a type of convection driven by this is known to cause the appearance of dopant striations in silicon grown by the so-called "float-zone" crystal-growth process. Dr. Neitzel, his colleagues, and students have computed domains of stable and unstable flow in a model system and have also demonstrated, experimentally, how it may be possible to suppress the flow oscillations which lead to the above striations. Much of the work done by Dr. Neitzel since receiving his Ph.D. has been of an experimental nature; currently, experimental research makes up more than half of his current projects. He began at Tech in 1990 as a Professor. Prior, he was Assistant, Associate, and Professor at Arizona State University.

Dr. Neitzel's current research interests lie in a couple of areas—the first group relate to free-surface flows involving droplets and surfaces. Permanent noncoalescence of droplets of the same liquid and permanent nonwetting of a solid surface by a normally wetting liquid are subjects that were stumbled upon in space-flight experiments involving liquid bridges. Thermocapillarity is one means by which two surfaces of the same liquid or those of a liquid and solid can be forced to remain apart. Such work has potential applications in microgravity environments as low-friction bearings and in lab-on-a-chip devices. Dr. Neitzel and his students have demonstrated how permanent nonwetting can be exploited to optically levitate droplets above solid surfaces and to transport them from point to point. Some older video clips may be seen at http://www.me.gatech.edu/~pneitzel_www/Levitation.  Current work has been able to generate nanoliter-scale encapsulated droplets of relevance to lab-on-a-chip applications that would employ this transport mechanism.

Other droplet-surface flows of interest are those associated with droplet impact on solid surfaces. One application of such work is to so-called “blood-spatter” analysis at crime scenes.

In the second area of bioreactor fluid dynamics, Dr. Neitzel’s research is concerned with bioreactors used for mammalian-tissue engineering and for the growth of algae for carbon sequestration.  In the former case, it is known that certain tissues, such as cartilage, exhibit “mechano-transduction,” in that they respond physiologically to their local mechanical environment. His group has been involved with the measurement and modeling of the flow fields in these bioreactors to enable tissue properties to be tailored to applications.  The bioreactor being developed for algae growth and carbon sequestration employs spiral-Poiseuille flow driven by cylinder rotation and an axial pressure gradient to drive a centrifugal instability of the Taylor-vortex variety.  Such a flow provides a means for exposing the algae to preferred light-dark cycles to maximize growth and carbon-dioxide uptake.  This work is both computational and experimental.

Dr. Neitzel’s research has been funded through grants from the National Aeronautics and Space Administration, the National Science Foundation, the Office of Naval Research, and the Air Force Office of Scientific Research.