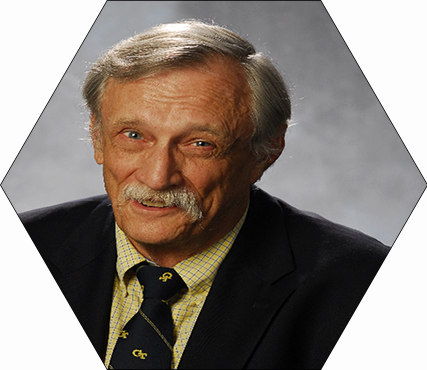 Dr. Antolovich's work experience has been varied and is outlined below.

Dr. Antolovich’s major research interests have been in the areas of deformation, fatigue and fracture, especially at high temperatures.  His current projects include experimental work and theoretical development of life prediction models for thermomechanical fatigue (TMF).

As depicted in the accompanying figure, Dr. Antolovich’s group is currently studying thermomechanical fatigue (TMF) in which temperatures and strains vary simultaneously and independently. Such conditions occur in jet engines. This work is being carried out to enable engineers to make better predictions of how long components will last.  Experiments are carried out in our labs (upper right) to simulate simultaneous changes in temperature and strain (lower left) that are encountered in actual just engine components such as the turbine blade shown in the lower right.  These experiments form the basis of models that we are developing to better predict the life.

Dr. Antolovich is the author of more than 100 archival articles in leading technical journals and books, and he has made more than 100 presentations to learned societies in the U.S., Europe, Canada, Korea, and Japan.

A. Pineau and S. D. Antolovich. 2009. High Temperature Fatigue of Nickel-Base Superalloys - A Review With A Special Emphasis on Deformation Modes and Oxidation. Engineering Failure Analysis 16, 2668-2697