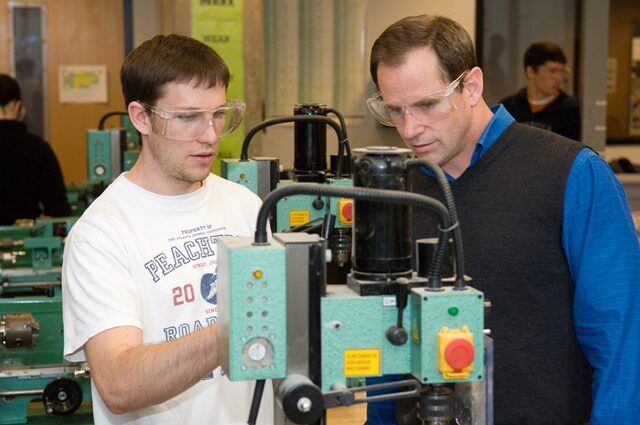 This year's lecture will be given by the 2013 award winner, William Singhose, Professor.

Building a Culture of Active Learning

Engaging and inspiring students through active learning is commonly accepted as a best practice in education.  However, active learning methods are harder for the faculty to perform and more expensive than traditional methods.  Therefore, support for such endeavors must be supported by a culture that encourages and rewards faculty for developing these more time-consuming and expensive courses.  This talk will discuss how a culture of active learning has been established in the School of Mechanical Engineering at Georgia Tech.

William Singhose received a Ph.D. from the Massachusetts Institute of Technology in June 1997. He then joined the faculty of the Woodruff School of Mechanical Engineering at the Georgia Institute of Technology in the Fall of 1998.  Before getting his Ph.D., Dr. Singhose was an engineer at Walt Disney World, Apple Computers, and Convolve, Inc.  While working at Convolve, he developed and installed control systems on industrial machines such as silicon-handling robots, coordinate measuring machines, and high precision air bearing positioning stages.  During his tenure at Georgia Tech, Dr. Singhose has developed a worldwide network of research collaborations in the area of system dynamics and command-shaping control.  His research has resulted in 4 issued patents, 3 pending patents, and over 300 technical papers.  Dr. Singhose has held visiting appointments at the Tokyo Institute of Technology, the Polytechnic University of Madrid, and MIT.

The Jack M. Zeigler (BME 1948) Woodruff Outstanding Educator Award was created in 1999 to recognize an outstanding educator among the academic faculty of the Woodruff School of ME at Georgia Tech. This is a lifetime achievement award that a person can received one time. The winner is announced at an annual spring School event and receives $5,000 in discretionary funds to use for professional development items such as travel, computers, and support of students. The winner is invited to deliver the Jack Zeigler Outstanding Educator Lecture at an assembly of the Woodruff School and has his/her name added to a permanent display in the MRDC Building. The winner is selected by a committee appointed by the Woodruff School Faculty Advisory Committee.