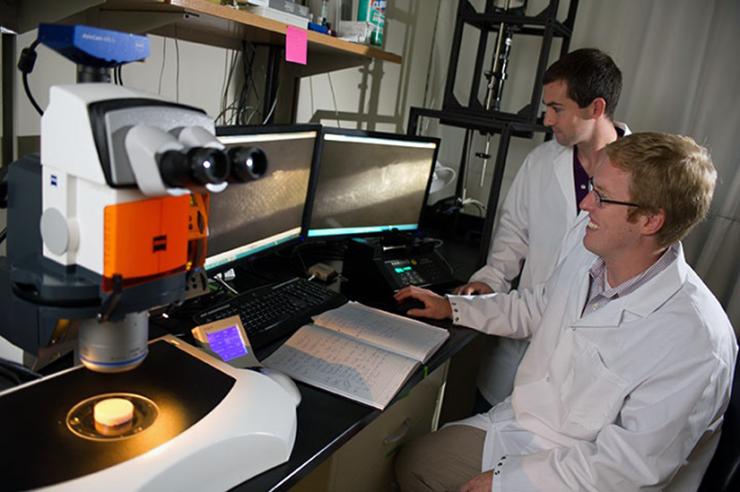 An estimated 120 million people worldwide are infected with lymphatic filariasis, a parasitic, mosquito-borne disease that can cause major swelling and deformity of the legs known as elephantiasis. Health-care workers rely on leg measurements to assess the severity of the condition. However, measuring legs that are severely swollen often proves cumbersome and impractical.
But now, scientists at Washington University School of Medicine in St. Louis, working with collaborators in Sri Lanka, have shown that a portable scanning device, developed in the Petit Institute for Bioengineering and Bioscience at the Georgia Institute of Technology, can measure limb enlargement and disfigurement more quickly and easily in patients with elephantiasis. The research tool makes it easy to obtain accurate measurements and determine whether treatments to reduce swelling are effective.
The study is published this month in the American Journal of Tropical Medicine and Hygiene.
“This is important because it will allow doctors and researchers to take very accurate limb measurements in developing nations, where there are often limited tools to monitor swollen limbs,” said senior author Philip J. Budge, M.D., Ph.D., an assistant professor of medicine in the Division of Infectious Diseases.
In patients with elephantiasis, the parasitic worms that cause the disease make their way into the lymphatic system and prevent the lymph vessels from working properly, which leads to swollen legs. This condition also is referred to as lymphedema.
“Unfortunately, the medication does not usually reverse lymphedema in those already affected,” Budge said. “The ability to get these measurements rapidly will make it much easier to treat patients, including those in clinical trials exploring better treatment therapies.”
The device, created by Atlanta-based LymphaTech, is essentially an infrared sensor, mounted on an iPad, that produces a highly accurate, virtual 3-D reconstruction of the legs using scanning technology similar to that found in Microsoft’s Xbox Kinect video game system.
“The technology was developed in our lab as part of a study funded by the Georgia Research Alliance,” said Petit Institute researcher and LymphaTech co-founder Brandon Dixon, associate professor in the Wallace H. Coulter Department of Biomedical Engineering and the Woodruff School of Mechanical Engineering at Georgia Tech, and LymphaTech’s chief scientific advisor. LymphaTech CEO Mike Weiler, earned his Ph.D. in Bioengineering as a member of Dixon’s lab. Both Dixon and Weiler are authors in this new study, spearheaded by Washington University.
“The study was extremely beneficial to Georgia Tech and LymphaTech’s efforts to develop technology for commercialization in clinical lymphedema monitoring,” Dixon said. “It provided third-party validation of the accuracy of the scanning approach by placing the scanner in the hands its intended clinical users.”
After learning about the technology, Washington University researchers Budge and Ramakrishna Rao, Ph.D., teamed up with international partners to test the device on 52 patients with varying stages of lymphedema at a clinic in Galle, Sri Lanka. Working with physicians at the clinic, the team compared scanner results with results from two other techniques frequently used to ascertain the severity of elephantiasis: use of a tape measure, and water displacement.
Tape measures allow researchers to measure limb circumference near the knees, feet and ankles. However, Budge said, the method can be difficult to standardize and unreliable in assessing leg volume because of bumpy, uneven skin surfaces caused by the swelling.
The water displacement procedure entails patients submerging a leg in a water tank and then measuring how much water is displaced. Each leg is done separately. “This is the gold standard for measuring limb volume, but it is cumbersome and impractical to use in field studies,” Budge said. “Some patients have lymphedema so severe, they have difficulty getting a leg into the water tank or standing still long enough for all the water to drain out. Or they may have open wounds that complicate the process.”
The study showed that the infrared scanner provided measurements of leg volume and of limb circumference at multiple points that were just as accurate and precise as those obtained by tape measure and water displacement.
“But the most encouraging news is that the scanner produced highly accurate results in only a fraction of the time of the other tests,” Budge said.
Researchers found that the average time required for scanner measurements of both legs was 2.2 minutes. In comparison, the tape measure and water displacement methods took an average of 7.5 minutes and 17.4 minutes, respectively.
“The scanning tool also offers convenience,” Budge said. “Many patients with swollen limbs often have great difficulty traveling from their homes to the clinic to have their measurements taken. The scanner should make it possible to take extremely accurate limb measurements in the patients’ homes or villages, without cumbersome equipment or inconveniencing patients.”
“To our knowledge, this is the first time that infrared 3-D scanning technology has been used in patients with filarial lymphedema,” Budge said. “It worked so well that it has been added as a measurement tool in future clinical trials in which we are collaborating.”
That study is a two-year, multisite, international clinical trial to determine whether the antibiotic, doxycycline, can reduce the severity of swelling and disfigurement in patients with lymphatic filariasis. Enrollment for Washington University’s partner site in Sri Lanka is scheduled to start this fall.
• • •
Yahathugoda C, Weiler MJ, Rao R, De Silva L, Dixon JB, Weerasooriya MV, Weil GJ, Budge PJ. Use of a Novel Portable Three-Dimensional Scanner to Measure Limb Volume and Circumference in Patients with Filarial Lymphedema. Published online October 9, 2017. DOI: 10.4269/ajtmh.17-0504.
This research was funded by Washington University School of Medicine in St. Louis and the U.S. Agency for International Development.
Disclosures: Co-author Michael J. Weiler is employed by LymphaTech. Weiler and J. Brandon Dixon, a professor of mechanical and biomedical engineering at Georgia Institute of Technology, have an equity stake in the company.
- Jerry Grillo, Parker H. Petit Institute for Bioengineering and Bioscience, Georgia Institute of Technology
To Top