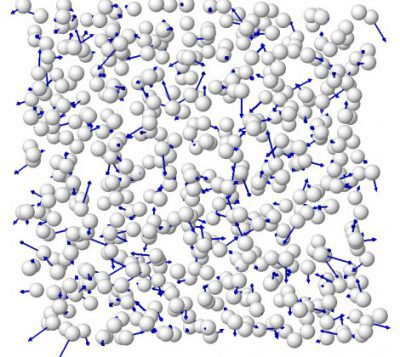 Asegun Henry wants to avert the worst effects of climate change by finding new forms of renewable energy and improving the materials that contribute to energy use.

"The way we produce electricity today pollutes the environment," said Henry, a mechanical engineering professor at Georgia Tech. "My research is primarily centered on converting us from a fossil fuel-based infrastructure to a renewable- or solar-based infrastructure so we can rely on renewable forms of energy that don't pollute the world at all.

"I personally see that as saving the world."

What makes Henry's approach to energy problems different from other engineers is his background in atomic-level computer modeling.

"I understand different processes in terms of what's going on at the atomic level," Henry said. "That allows me to develop insights and opportunities for new ideas that are different from others that are coming from the macroscopic level."

His research is largely interested in how heat transport works at the smallest scales.

In October, Henry published the results of a study of amorphous silicon dioxide -- commonly known as glass -- in Nature Scientific Reports that answered a longstanding mystery about the everyday material: why its thermal conductivity rises with temperature.

The transport of heat in amorphous silicon is determined by the behavior of phonons in the material. Phonons are similar to electrons or photons, in that they carry heat, but instead of deriving from electromagnetic radiation or negatively charged subatomic particles, they are associated with the collective vibrations of atoms.

Scientists can accurately predict the thermal conductivity of many crystalline materials using expressions based on the widely-used "phonon gas model". However, modeling heat transfer in amorphous materials -- those that lack the order and periodicity of a crystal -- is more challenging.

"Unlike crystalline materials, where the vibrations become collective motions that act like sound waves, in amorphous materials, you get a different kinds of vibrations, the majority of which look random, like the underlying structure," Henry explained. "You even get small, localized vibrations that consist of only dozens of atoms."

These small vibrations were known to exist, but no one had ever assessed how much they contribute to heat transfer.

"The assumption was that they don't contribute at all," Henry said. "But what was surprising that we found with our new method was that in this specific material, the localized modes contribute substantially."

Using the Stampede supercomputer at the Texas Advanced Computing Center -- one of the most powerful in the world -- Henry ran simulations that captured the behavior of localized vibrations as never before.

"These calculations that are being done are intractable on a single machine. You'd wait years to get the answer," he said. "To be able to break the problem into hundreds or thousands of individual parts that run concurrently, and do it massively in parallel is completely enabling."

The thermal conductivity of glass happens to be important for energy efficiency.

"Double digit percentages of all energy use in the U.S. is related to glass," Henry said. "The main place you lose heat is through windows."

Not only that: amorphous silicon is used in solar cells, and most polymers -- plastics -- such as those used in personal electronics, are composed of amorphous materials.

Henry's successes in capturing the atomic vibrations of glass was due to the development of a new way of studying the dynamics of phonons, which he'd created with with Wei Lv, a doctoral student in his lab, Known as Green-Kubo Modal Analysis (GKMA), the new method uses molecular dynamics simulations to more accurately calculate the contributions different modes of vibration make to the heat conduction.

In December 2016, Henry and Lv published a broad analysis of GKMA versus the phonon gas model in Nature Scientific Reports. Their results strongly suggest that the phonon gas model is not applicable to amorphous solids. The research is supported in part by a National Science Foundation (NSF) CAREER Award.

The GKMA method can be applied to a wide range of materials, including alloys, other amorphous solids and even rigid molecules.

"Asegun's project is an excellent example of the type of effort supported by NSF: basic, very complex, and yet potentially disruptive to the engineering practice," said José Lage, NSF Thermal Transport Processes program director. "His effort is at the forefront of one of the most exciting new research areas in thermal transport processes, and has already affected our understanding of a very complex engineering phenomenon."

Ultimately, Henry hopes to use the insights he has gained to identify and design materials with unprecedented properties -- materials that can transfer heat far more efficiently and potentially even superconducting materials.

"We're at the edge of pushing our community to rethink the problem of thermal conductivity and exploit behaviors to achieve properties that were previously thought to be impossible," he said.

Scientists typically understand data through graphs and visualizations. But is it possible to use sound to interpret complex information?

Henry believes it is, based on his personal experiences gaining insights from recordings of atomic vibrations. His efforts began when he was trying to understand the results of a simulation of a stretched out polymer chain.

"If you look at the data, it looks like white noise," Henry said. "We decided to sonify the data, and as soon as we listened to it, we could hear the pattern."

Henry, who has a background in music, says this makes sense, given the brain's natural audio processing powers.

"The human ear is better at pattern recognition than the eye is," Henry said. "If you interact with an organ that's better, you can find patterns that aren't obvious."

Ever since, he has been sonifying the vibrations of various materials as a way to explore their significance.

"When you listen to the speaker, the magnet is doing the same motions the atom is doing," he said.

Turning atomic properties into sound may also be an effective way to get students interested in physics and materials science. As part of his NSF CAREER award, Henry has been leading a summer outreach program where African-American and women undergraduates, high school music teachers, and high school students are working to convert the vibrations of atoms into sound files.

They will generate results for the entire periodic table and disseminate their findings through a mobile app that lets you listen to every element.

Individuals will be able to use the mobile app to make music from these sounds, providing a new way for the public to learn and appreciate the beauty of chemistry.

"The approach of using sonification is rather general and could be meaningful for many areas, as it exploits a basic property of human hearing versus sight," Henry said. "Hopefully our application will spark more usage throughout science and engineering."