A new microfluidic method for evaluating drugs commonly used for preventing heart attacks has found that while aspirin can prevent dangerous blood clots in some at-risk patients, it may not be effective in all patients with narrowed arteries. The study, which involved 14 human subjects, used a device that simulated blood flowing through narrowed coronary arteries to assess effects of anti-clotting drugs. 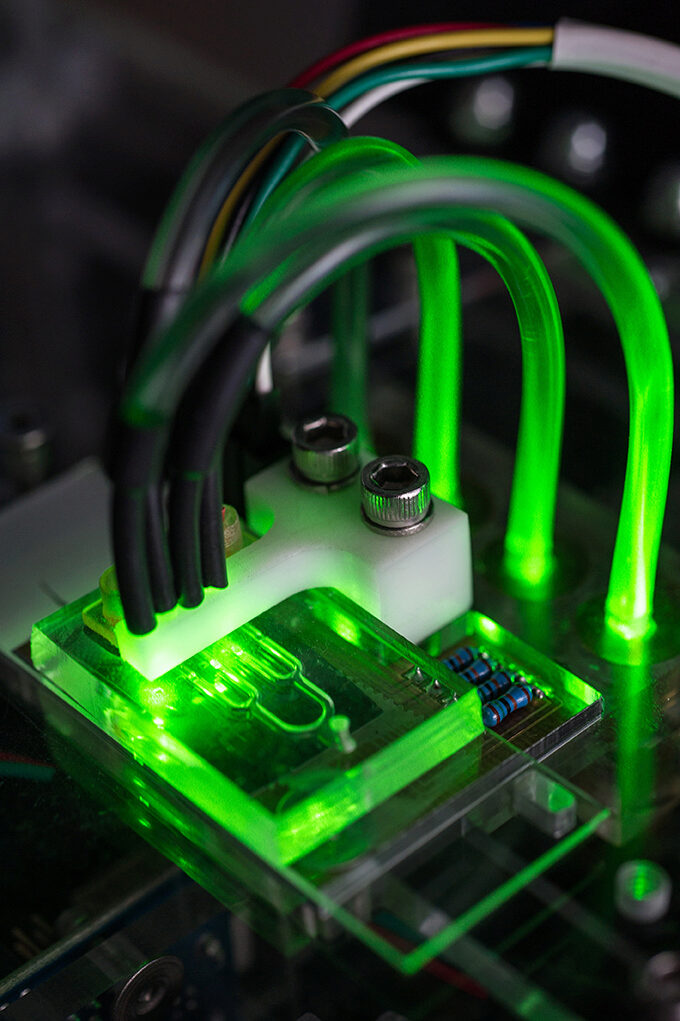 The study is the first to examine how aspirin and another heart attack prevention drug respond to a variety of mechanical blood flow forces in healthy and diseased arteries. Patients’ blood was tested in a patent-pending microfluidic device with narrow passageways to simulate the coronary arteries. The data are consistent with clinical findings showing that physiology has a major influence on the effectiveness of drugs used for heart attack prevention.

The researchers believe that a benchtop diagnostic device like the one used in this study could save lives by preventing heart attacks and help lower healthcare costs by giving physicians better guidance on how drugs may affect individual patients.

“Doctors have many drug options and it is difficult for them to determine how well each of those options is going to work for a patient,” said Melissa Li, who was a graduate student at the Georgia Institute of Technology at the time of the study. “This study is the first time that a prototype benchtop diagnostic device has tried to address this problem using varying shear rates and patient dosing and tried to make it more personalized.”

The study was sponsored by the American Heart Association, a Wallace H. Coulter Foundation Translational Grant and by a fellowship from the Technological Innovation: Generating Economic Results (TI:GER) program at Georgia Tech. The study was published in a recent edition of the journal PLOS ONE.

About 10 percent of the U.S. population takes drugs every day because they are at risk of a heart attack. When a patient comes to a hospital with heart disease, doctors have multiple treatment options, all with different routes of action, time scales and prices.

“For a patient being prescribed anti-thrombotic drugs who is at risk for a heart attack, we can draw a small amount of their blood and quickly push a little bit through this device, and based on that information, tell them to take a certain amount of a certain drug. That’s where we’re going with this project,” said Craig Forest, an assistant professor of bioengineering in the George W. Woodruff School of Mechanical Engineering at Georgia Tech.

Forest’s lab led the study in collaboration with David Ku, a medical doctor and mechanical engineering professor at Georgia Tech. Ku is the Lawrence P. Huang Chair Professor of Engineering Entrepreneurship and a Regents’ Professor of Mechanical Engineering.

For the current study, researchers used the diagnostic device to examine two treatments for potential heart attacks: aspirin and a class of drugs called GPIIb/IIIa-inhibitors. GPIIb/IIIa-inhibitors are generally given to patients with a high risk for a heart attack, and these drugs can be expensive. The study found that the two drugs have very different effects on blood clotting. 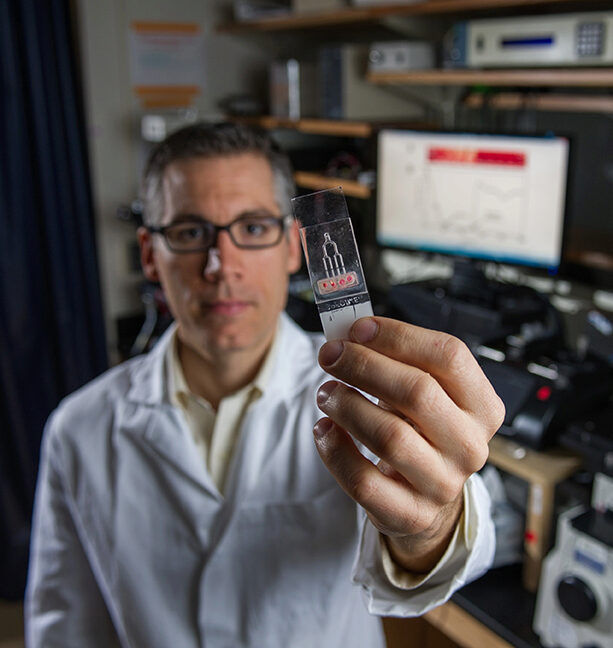 When arteries are constricted, such as in patients with atherosclerosis, blood must squeeze through narrow passages. That pressurized flow induces a mechanical force called shear. Under high shear rates in arteries— blood flowing through a narrow opening — blood is more likely to clot. When blood is forced to squeeze through a small opening, platelets hook together, forming a clot.

To show how these drugs affect clotting at high and normal shear rates, blood samples were drawn from patients over several days. The scientists added the two drugs at different doses to those blood samples and ran them through a microfluidic device. The microfluidic device has four channels that mimic the coronary arteries, allowing researchers to study clotting under a variety of conditions.

The researchers found that under high shear rates, clots still formed in the presence of aspirin, but that the clots became unstable and broke off the simulated artery walls.

Li said that their evidence suggests that aspirin should be fairly effective for most people at preventing heart attacks, but not as effective at preventing heart attacks in patients with atherosclerosis. This study can help identify which individuals can be helped, and which cannot.
The current study would need to be replicated in a large, controlled study before this device can be moved to the clinic or hospital.

“This finding is something that’s been echoed in the literature by physicians who would find that a number of patients who would take aspirin were not receiving any clinical benefit,” Li said. “This is an explanation mechanically of why that might occur.”

That phenomenon has been called aspirin resistance, which is a catchall term for when patients don’t respond to aspirin for unknown reasons.

“What we showed is a good explanation for the conditions under which aspirin resistance occurs and one that matches up with what other people have found,” Li said.

GPIIb/IIIa-inhibitors were effective at preventing blood clots across all shear rates tested, the study found, suggesting that these drugs would be effective for people whether they had atherosclerosis. Clinical evidence also supports this finding, Li said.

The researchers used a statistical method known as the Cox-Hazard analysis, performed by bioengineering graduate student Nathan Hotaling. The analysis is commonly used by doctors to determine if drugs are safe for a patient. Using this analysis in a prototype benchtop diagnostic device is a unique approach and showed that, statistically, the research findings were significant.

“These microfluidic devices are so cheap and require so little blood that it could become possible for someone to use this in a disposable, rapid way,” said Forest.

This research is supported by the American Heart Association (10GRNT4430029), a Wallace H. Coulter Foundation Translational Grant and by a fellowship from the Technological Innovation Generating Economic Results (TI:GER) program at Georgia Tech. Any conclusions or opinions are those of the authors and do not necessarily represent the official views of the sponsoring agencies.